With correction-officer mom by his side, Bed-Stuy's Jaiquwan Jarrett gets ready for the NFL Draft

Mo' Better Jaguars Football league in Brownsville are doing some big things if you didn't know! This Football program has put many of kids in College through the game of Football. Read this article about Jaiquwan Jarrett written by Mitch Abramson talking about his transition from Fort Hamilton High School to Temple University to becoming a Professional Football Player in the NFL coming from Bed-Stuy! 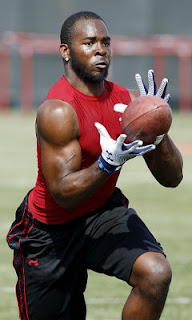 In a game against UConn on Sept. 18, Temple's Jaiquawn Jarrett, a 6-foot, 200-pounder, ran toward the sideline and crashed into Husky running back Jordan Todman, lowering his shoulder and blasting Todman several feet backward. It was the type of collision that leaves both players spinning, but Jarrett, a safety from the Bedford-Stuyvesant section of Brooklyn, rose to his feet quickly and nodded his head in approval, fully enjoying the results of his work. Sitting in the stands at Lincoln Financial Field that day was Jarrett's mother, Audrey Young.

"That's my son!" she likes to belt out to anyone within earshot, in case the No. 5 jersey bearing the words "Jarrett's Mother" on her back doesn't convey the message.

She has always been there for her son, raising him, along with his three siblings, as a single mother, playing the role of caretaker, breadwinner, cheerleader, and when she had to be, law enforcer, keeping her kids in line. That last attribute - the disciplinarian - may have been the easiest role for her to adapt.

For the past 21 years, Young has worked as a corrections officer at Rikers Island, guarding an all-male population of murderers, rapists and drug dealers awaiting sentencing. Jeff Legree, Jarrett's stepfather who coached him in youth football, knows for sure where Jarrett gets his toughness and spunk.

"He gets it from his mother," Legree says, who married Young in 2007, with a chuckle.
Jarrett, who won back-to-back city championships for Fort Hamilton High School from 2005-2007, is poised to become one of the first safeties taken in this month's NFL draft. Depending on who you speak to, Jarrett could be selected anywhere between the third and fifth rounds, possibly by the Jets or Giants, since both teams have worked him out. While there are more well-known players from bigger programs in the draft, it's unlikely they have a resume that matches Jarrett's, or a tough-as-nails mother who raised four children on her own.

"This is the greatest story for New York area kids because (colleges) don't recruit our football boys," says former Fort Hamilton coach Vinny Laino, who retired after the 2009-2010 season. "You want to talk about a kid who fell through the cracks? That's Jaiquawn."

Jarrett, who led Temple in tackles his senior season with 74, didn't receive a single Division I scholarship offer as a high school senior until a player flunked off Temple. He won the starting free safety position as a freshman and wound up a two-time first-team All-MAC selection for the Owls. Now, he's on the radar of a number of NFL teams. Jarrett credits his mom for keeping him on the straight and narrow. Brandon Reddish, a Syracuse-bound senior at Fort Hamilton, calls Jarrett an "inspiration" while several high school coaches in the area view him as a role model for other city kids with professional aspirations. Just four players from the five boroughs appeared on 2010 NFL Week 1 rosters, and Jarrett, all the way from the Mo' Better Jaguars youth football league in Brownsville, is ready to join that select company.

To read the complete article click here: With correction-officer mom by his side, Bed-Stuy's Jaiquwan Jarrett gets ready for the NFL Draft
Posted by Brownsville Partnership Community Organizers at Tuesday, April 19, 2011