Brooklyn's dad fighting back after losing his son to gun violence

The gun violence in the Brownsville community is effecting the residents terribly. Some of our residents are scared to come outside in fear being accidental hit by a stray bullet. Read this article wriiten by Erin Durkin of the New York Daily News. Mike Tucker of Bedford Stuyvesant lost his Stephonne Crawford in 2005. He wants to share his story with the world now. 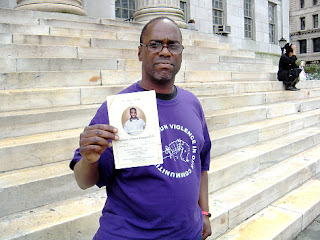 Tucker's son, Stephonne Crawford, 21, was accidentally shot in East New York in a 2005 scuffle with cops who were trying to question him about a separate shooting. He was killed instantly when a detective's gun discharged, police said at the time.


"The gun accidentally went off and shot him in the back of the head," said Tucker, 45, adding that Stephonne, who had a 1-year-old son, had fallen in with the wrong crowd but was trying to turn his life around. "I was really shocked and devastated."


Tucker has channelled his grief into a passion for stemming gun violence, founding a small nonprofit called Lay the Guns Down.


"I decided enough was enough," Tucker said. "Where I come from in Brooklyn, I got fed up with people being used to gun violence and people being shot dead in the street.


Tucker is looking to raise $10,000 to film more ads that will feature everyone from rappers to elected officials, and air them on TV. He's holding a fund-raiser today at the Applebee's Restaurant in Bedford-Stuyvesant. Applebee's will donate 10% of the proceeds from the meals of diners who come in with a Lay the Guns Down flyer to Tucker's nonprofit.


Tucker is also working with local musicians to put together an album of songs about violence.


He concedes he's fighting an uphill battle, but draws on his son's memory for inspiration.


"We know that it's not going to stop overnight," he said. "If I can save one life a year, I'm doing my job. It keeps me going knowing that he's looking down on me and seeing that I'm not letting him be forgotten."
Posted by Brownsville Partnership Community Organizers at Thursday, May 19, 2011