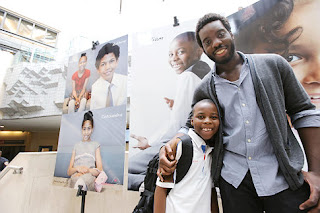 (Courtesy of Mark Bonifacio of the New York Daily News)
﻿Photographer Rayon Richards with foster child William, at 'Heart Gallery' exhibit now on at Atlantic Terminal.
Photographer Rayon Richards has a good heart! He help facilitate a photo shoot, along with HeartShare Human Services, for Foster Child who are looking to be placed in a home. The "Heart Gallery" is at Alantic Terminal in Downtown Brooklyn. Read this article written by Erin Durkin of the New York Daily News.

For the next month, commuters passing through downtown Brooklyn's busy Atlantic Terminal will be greeted by the smiling faces of 50 foster kids searching for permanent homes.

Life-sized portraits of the kids taken by renowned photographers were unveiled yesterday as part of a "Heart Gallery" on display in hopes of enticing potential parents.


Malik, 14, moved into his latest foster home in Canarsie a week ago - his sixth since he was taken away from his parents at age 6 after they left him home alone for weeks, he said.


"I never found the right place," said Malik, an eighth-grader who has had to change schools four times while being shifted among foster homes all over the city. "I don't feel like a normal teenager.

"I'm hoping to find a nice family," Malik said. "I never felt loved by a parent before."


Eight-year-old William squealed with delight when he saw his portrait hung front and center at the exhibit.


"That's me!" said William, who is autistic and lives with a foster family in Boerum Hill. "I like my picture...[I'd] like to find [a] family to adopt me." 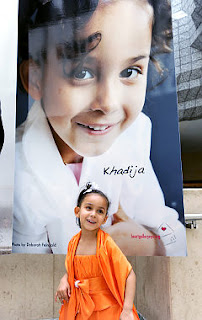 ﻿(Courtesy of Mark Bonifacio of the New York Daily News)
Foster child Khadija revels in seeing her images at exhibit, organized by HeartShare Human Services.
William has bounced around between foster homes since he was a baby, said Patricia McCollin of HeartShare Human Services, and finding a permanent home is a particular challenge because of his special needs.

"You see how lovable he is. You see how infectious he is," she said. "He needs someone who's going to be open and patient and willing to learn."


The nonprofit sought out famed photographers to shoot the spirited portraits, which will be on display through June 15.


Deborah Feingold - whose past subjects include Mick Jagger, Alicia Keys and President Obama for the cover of his book "The Audacity of Hope" - did the portraits of Malik and 4-year-old Khadija.


"We all want them to find a home," Feingold said. "This was a way of using the camera to try to do something that would hopefully make an impact on someone's life."


Heart Gallery NYC executive director Laurie Sherman Graff, herself the adoptive mom of a 13-year-old son, said that even people who have thought about adoption don't consider the fact that they could adopt an older child from foster care.


Heart Gallery officials hope the photographs hanging in Atlantic Terminal will serve as a constant reminder of that.


"People can't help but look," she said.
Posted by Brownsville Partnership Community Organizers at Thursday, May 19, 2011