Are Healthy School Lunches Too Expensive For The American Economy?

Obesity amongst our youth across the nation, is a tough topic to debate about. We want our kids to be healthy, but the cost maybe too expensive...

Read this article from The Associated Press

Let's enlighten each other 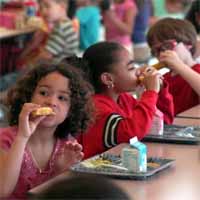 Washington, DC (June 1, 2011) -- House Republicans are pushing back against Obama administration efforts to promote healthier lunches, saying the Agriculture Department should rewrite rules it issued in January meant to make school meals healthier. They say the new rules are too costly.

The bill, approved by the House Appropriations Committee late Tuesday, also questions a government proposal to curb marketing of unhealthy foods to children and urges the Food and Drug Administration to limit rules requiring calorie counts be posted on menus.

The overall spending bill would cut billions from USDA and FDA budgets, including for domestic feeding programs and international food aid. The panel also cut some farm subsidies to cut spending.
Republicans are concerned about the cost of many of the Obama administration proposals, which they regard as overregulation, said Chris Crawford, a spokesman for the chairman of the Appropriations Committee’s agriculture subcommittee, Rep. Jack Kingston, R-Ga.
Crawford said the marketing guidelines, released last month, are “classic nanny-state overreach.” Though the guidelines, which would restrict which foods could be marketed to children, are voluntary, many companies are concerned that they will be penalized if they don’t follow them. The bill questions whether the Agriculture Department should spend money to be part of the marketing effort.
“Our concern is those voluntary guidelines are back-door regulation,” he said, deploring the fact that kids can watch shows that depict sex and drugs on MTV, but “you cannot see an advertisement for Tony the Tiger during the commercial break.”
The school lunch guidelines are the first major nutritional overhaul of students’ meals in 15 years. Under the guidelines, schools would have to cut sodium in subsidized meals by more than half, use more whole grains and serve low-fat milk. They also would limit kids to only one cup of starchy vegetables a week, so schools couldn’t offer french fries every day.
The starchy vegetable proposal has been criticized by conservatives who think it goes too far and members of Congress who represent potato-growers. They say potatoes are a low-cost food that provides fiber and other nutrients.
The Republican spending bill also encourages the FDA to limit new guidelines that require calories to be posted on menus to restaurants, asking that grocery stores, convenience stores and other places whose primary purpose is not to sell food be excluded from the rules.
The effort would dial back many of first lady Michelle Obama’s priorities in her “Let’s Move” campaign to curb childhood obesity and hunger.
“This shows a very clear trend in trying to undermine some of the important gains in nutrition policy,” said Margo Wootan, director of nutrition policy at the advocacy group Center for Science in the Public Interest.
The overall spending bill would cut billions from USDA and FDA budgets, including for domestic feeding programs and international food aid. Even after some of the money was restored Tuesday, the bill would still cut about $650 million â€“ or 10 percent â€“ from the Women, Infants and Children program that feeds and educates mothers and their children. It would cut almost 12 percent of the Food and Drug Administration’s $2.5 billion budget, straining the agency’s efforts to implement a new food safety law signed by the president early this year.
Posted by Brownsville Partnership Community Organizers at Monday, June 06, 2011