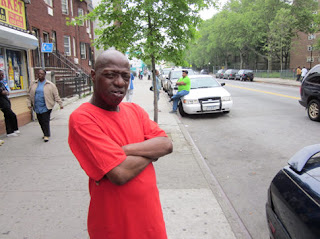 (Courtesy of NY Daily News)
Brownsville resident James Kinard, 50, worries about crime in his neighborhood.
Brownsville is a neighborhood filled with unique individuals. Our qualities and our characteristics genetically bonds us to become a rare breed in society. Center for Court Innovation volunteers last fall, conducted a survey about what are the "serious issues" in Brownsville. Jake Pearson and Al Barbarino complied the results into a great article. This is a must read!!!!
Guns. Gangs. Drug use. Drug selling. Assaults.

A whopping 80% of Brownsville residents say these are the biggest problems plaguing their community, according to a new survey.

Volunteers from the Center for Court Innovation spent weeks last fall asking more than 800 Brownsville residents questions about their neighborhood - and this month released the troubling results.


Many of those "serious issues" can be deadly.

More than 70% of residents said guns were a big problem in the neighborhood - a neighborhood which has seen 11 murders so far this year, up from six at this time last year, according to 73rd Precinct police stats.

"It's scary - I don't walk around the streets, I don't sit around the park [because] if I'm sitting there I might get hit by a bullet," said Jessie Reed, 62, who has lived in the Brownsville Houses for the past 10 years.
"Once I'm home and inside, I stay there, that's it."

Reed is not alone - only 37% of female residents said they felt safe on the street, walking to and from the subway and in the parks.

Experts said that even though crime has gone down in Brownsville in the past decade, it is still high compared with the rest of the city - and that especially violent crime brings fear to the entire community, not just the victims.

"Just imagine living in a neighborhood where the biggest issue people face is the presence of guns," said Richard Aborn, president of the Citizens Crime Commission of New York City.

Unlike some Brooklyn neighborhoods that have shaken their violent reputations in recent years, experts said Brownsville - which has long suffered from a lack of city services, high crime and unemployment - will take longer.
"
All the things people take for granted in other neighborhoods we don't take for granted," said Greg Jackson, 59, executive director of the Brownsville Partnership, a community group.
"
We had the worst cops at one time, the worst teachers at one time, the worst hospitals...and we still got problems, but now people of my generation think that things are going great because they saw it when it was really bad."
Posted by Brownsville Partnership Community Organizers at Wednesday, June 01, 2011