Read this article written by Jake Pearson for the New York Daily News. Jake Pearson goes into a Beauty Salon... but he comes out with something better than gossip! 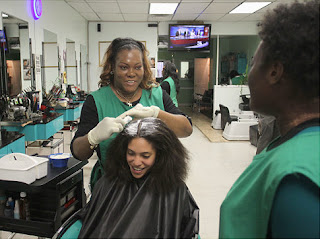 (Courtesy of Robert Mecca)
Samantha Brown (c.), owner of Women's Hair Care Center in Crown Heights, works on hair of Raicine Terry as stylist Modestina Bell looks on.﻿
For women, the hair salon has long been an intimate place for private conversations, gossip and advice between stylists and clients.

From neighborhood news to Arnold Schwarzenegger's secret family, no topic is off-limits - and in some Brooklyn neighborhoods, obesity, diabetes are now on the list of sacred topics.


"No I don't need the scale, I've never used it," said city worker Alison Fulford, 43, after Crown Heights salon owner Samantha Brown mentioned there was a scale in the bathroom as Fulford got her hair pressed and dried last week.


The scale, a blood pressure machine, and DVDs with exercise routines, healthy food options and weight-loss tips have also been supplied to the salons.


"I don't mind them suggesting it because my stylist knows what I want; she's like a teacher talking to a student," said Fulford, a glass dryer covering her head at Women's Hair Care Center Inc. on Nostrand Ave. "I just don't want to do it today."


"I probably don't eat as well as I could," conceded Edwards, 20, as she got her hair shampooed and pressed by Brown. "Some of my family members have diabetes, so it's important to me."


Public health officials from the Arthur Ashe Institute for Urban Health enlisted Brown to turn her salon into a mini-doctor's office and her stylists into substitute M.D.s.


Earlier this year, officials at the Brooklyn public health group won a $190,000 grant to use hair stylists throughout central Brooklyn to talk about healthy living.


For the next year, the experts will track more than 1,000 women of African and Caribbean descent who use the salons to see if they change their habits.


"In our neighborhood, most women are not as educated about health stuff as they are in other neighborhoods," said Brown, who has owned the salon for 14 years. "We don't eat the foods we're supposed to eat, and we don't exercise enough."


Officials from Arthur Ashe come by from time to time to give seminars and demonstrate how to prepare healthy meals like vegetable stir fry.


"What we're looking for are changes in behavior," said John Lewter, director of development at Arthur Ashe. "How many people start saying, 'I've actually stopped eating red meat' or 'I joined a walking club'?"


"As a stylist, we get people ready for graduations and weddings, so even though we're not in the family, we're part of the family," said Bell, 22.


"So we give them the information and advice ... a lot of people will talk about their blood pressure being too high, then the stylist will say, 'Maybe you should cut out so much salt.'


What kind of shape their customers are in


27.3% of residents in Bed-Stuy and Crown Heights say they suffer from it.


10.6% of residents in Bed-Stuy and Crown Heights say they suffer from it.

13.3% of residents in Flatbush say they suffer from it.


Physical activity in past 30 days:


29.9% of residents in Bed-Stuy and Crown Heights said they have had no physical activity.