Another interesting article from BlackNews.com... 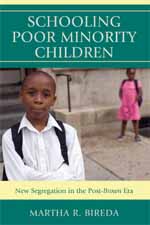 Nationwide (March 14, 2011) -- A new book, Schooling Poor Minority Children: New Segregation in the Post-Brown Era, authored by Martha R. Bireda, Ph.D., chronicles the process of desegregation to a return to post-Brown resegregated schools. The author describes this "new" segregation as a "redesign of pre-Brown segregation" and details the devastating impact upon poor minority students.

The return to segregated neighborhood schools, most often populated by poor black and brown students, unequally funded, and labeled "low performing" or "failing" should be taken very by seriously by the black community. The "new" segregation that has evolved in the post-Brown era is even more insidious than that of pre-Brown segregation. The deeply rooted problems that plagued pre-Brown segregated schools persist; while a new set of problems inherent in the "new" segregation have emerged. The "new" post-Brown segregation is creating a class of chronically undereducated students who will be left with only underclass options.

The author examines two crucial school-related factors characteristic of post-Brown segregated, low performing schools serving predominately poor minority populations: first, a school culture that is characterized by low expectations for students and the lack of a collective responsibility for student learning; and secondly, a stigmatizing school climate that focuses on control of students rather than creating rigorous and challenging learning environments. The combination of these factors results in the failure of these students to develop an academic identity, a lack of achievement motivation, the development of low self-expectations, disengagement from the learning process, academic failure, and in far too many instances non-completion.

This is a critical period in the future education of black children. As solutions are being proposed to close the achievement gap, none address the destructive effects of resegregation and the stigmatizing environments in which poor black and brown children are forced to learn. It is imperative that black parents and the black community become involved in all discussions about educational reform. The author suggests that the black community must re-commit itself to the education of black children, exercising the same fervor as during the initial stages of desegregation. She recommends that we must engage in yet another crusade, a "fourth crusade" to ensure equal educational opportunities for our children.

Dr. Bireda has been an educational consultant for twenty years specializing in racial disparity in achievement and discipline. Schooling Poor Minority Children: New Segregation in the Post-Brown Era and a previous book related to racial disparity in discipline, Cultures in Conflict: Eliminating Racial Profiling are available from www.rowmaneducation.com or Amazon.com.
Posted by Brownsville Partnership Community Organizers at Monday, March 21, 2011